All That I Know

I've been told that I'm a smart kid but as far as I'm concerned I'm a dumb guy who makes rash decisions driven by spite and what's in front of me more than thinking about the long term. I say this upfront not to beat on myself but to say, this is not written from the perspective of a know-it-all educating the public. I'm just a dumb guy scared of the world I live in. I think a lot of us are just scared, dumb guys. And I'm just trying to take stock of all that I know to take a second to think.

I know the police were created to serve the wealthy.

Yeah I dunno man, all that “protect and serve” stuff seems like nice PR to me. The earliest organization that resembles modern policing in America were the slave watches, first formerly organized in South Carolina in 1704. And like it sounds, their express purpose was to round up escaped slaves and terrorize slaves to scare them into conformity. So the subjugation of black populations is built into the foundation of the police force in America. But of course it's not just about black people. It could've been anything valuable to the wealthy class that held power in the South. It's just that black slaves happened to be the most valuable property of the upper class. Jump forward a century and police forces are being used to silence labor organizers like during the Haymarket Riots in 1886. A bomb was thrown at police trying to subdue the protests, leaving seven policemen and four workers dead by the end. But what is often left out in the retelling of the Haymarket Riots is that the reason workers had organized for protests on that day was because a couple days ago a peaceful march in support of the eight hour workweek (which was already the law of the land but was blatantly unenforced) was silenced by the Chicago Police who opened fired and killed several protesters. And this keeps happening in history. 1934, a union strike of dockworkers is attacked by San Francisco police and the National Guard in what becomes known as Bloody Thursday. 1979, San Francisco police retaliate at protests and riots sparked by anger when Harvey Milk's (the first openly gay American mayor) murderer, Dan White, is found guilty of voluntary manslaughter instead, by clubbing protesters and deliberately destroying the legendary gay bar Elephant Walk in what becomes known as the White Nights. Twice, once in 1874 and again in 1988, cries for the city to do something about the employed and the homeless were met with clubbings and beatdowns. In a chilling flash to the present, many officers concealed their badge numbers with tape.

I know the police force was engineered to retain power and protect it.

As protests form around the country- even around the world, it becomes clear that many would be peaceful demonstrations have been escalated by the police.

In a shocking big dick move, the SBA doxxed the daughter of NY mayor Bill de Blasio after he made the most cowardly “both sides” statement about the NYPD car running into protestors pictured above. I guess even that wasn't enough for the unions 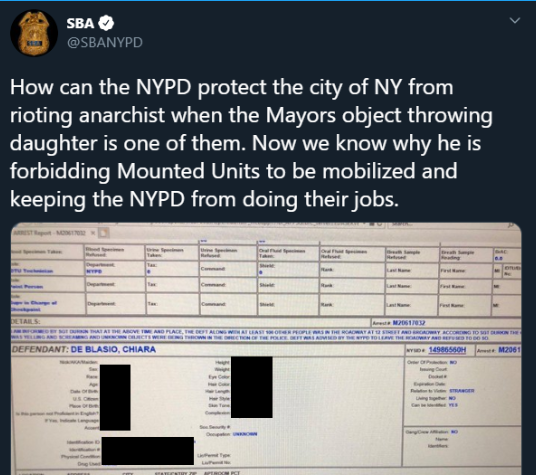 Oh I guess that brings me to the unions. Police unions are the most powerful labor organizations in the country. Congratulations, except you're helping cops kill us by protecting them as much as possible. Unions help bad cops get back on the job. They are on the frontlines of obscuring the misdeeds of cops from the public eye as much as possible, leading to “gypsy cops” that can shuffle around from department to department because their misconduct gets erased. Remember how mad people were about how long it took Derek Chauvin to be arrested and questioned? Oftentimes delays between police misconduct and questioning is built right into labor contracts, so that offending officers can take a few days to “get their story straight”, a privilege rarely given to civilians and fought for by unions. Protect and serve the public? Fuck you, got mine. Police unions are engineered to protect cops-bad or good from any retribution and they will fight to the teeth for their survival. And because so...

I know police reforms have so far done little.

Often in the aftermath of police violence the topic of “police reforms” is brought up and difficulties encountered with having reforms enacted, but you don't hear often discussions of whether or not the reforms that have managed to pass have worked. Like bodycams. There was a lot of talk about bodycams after the shooting of Michael Brown with advocates claiming that wide use would dissuade officers from using excessive force or that at the very least they'd be caught on camera and would result in swifter justice. But six years later results are a wash. A study focusing on the Orlando PD found that officers that wore body cams were 53% less likely to use force and have 65% less civilian complaints levied at them. Meanwhile a study in Washington DC resulted in little difference in the use of force between those who wore body cams and those who didn't. As for whether bodycams brought an increase in justice, they don't seem to have brought any more convictions than before bodycams were in wide use. What about procedural reform? After the killings of Michael Brown and Eric Garner, the Obama Administration laid out a large list of recommended reforms to proceedings like embracing “a guardian mindset to build public trust and legitimacy”, “initiating positive nonenforcement activities to engage communities that typically have high rates of investigative and enforcement involvement with government agencies”, and having “comprehensive policies on the use of force that include training, investigations, prosecutions, data collection, and information sharing.” The reforms were enacted in Minneapolis and after almost $5 million they clearly didn't work. None of these reforms solved the underlying foundation of the police force that encourages officers to retain power and serve the upper class before the public.

I know people have been suffering for too long.

Let's count the numbers. It's been an year since federal charges were dropped for the police officer that killed Eric Garner. Six years since Eric Garner died from a chokehold while unarmed, gasping “I can't breathe.” It's been four years since Philando Castile was shot and killed in his car by an officer who allegedly thought Castile was reaching for a gun. There was no gun. Three years since the officer that killed him was acquited. There was a dash cam. It didn't matter. Also six years ago, Tamir Rice was twelve years old when he was shot to death by a police officer that thought he was reaching for a gun. It was an airsoft. The officer was not charged. Also six years ago, Michael Brown was eighteen years old when he was shot twelve times by a police officer. The police officer that killed Michael Brown was not charged. Seven years ago, the Black Lives Matter movement was founded following the acquittal of the watchman that killed Trayvon Martin. Trayvon was seventeen. There is no national database of police violence. But one database has recorded at least 1000 deaths a year by the hands of police since its inception in 2013. In 2015, almost 20% of those killed were unarmed. 2018 was the most violent year by 1143. Black people made up 24% of those killings despite comprising 13% of the population. 52 years ago, Martin Luther King Jr. was assassinated. The FBI considered him a radical and closely surveiled him as a national threat.

380 years ago the Virginia General Court sentenced a black man to slavery for the first time.